Mongrel Mob and Black Power representatives hope a new parenting and family values pledge will help end years of friction between the two gangs in Hawke's Bay. The hope came in the Otatara Accord, an agreement reached yesterday at the end of a weekend retreat based on the historic Otatara Pa reserve, near Taradale. The accord reads: "Having met in wananga, at Otatara, the leaders of the Mongrel Mob and Black Power who are resident in Hawke's Bay, collectively declare the following intentions:
- to improve our parenting skills.
- to support whanau ora.
- to strive for understanding of each other's issues as a step towards peace on the streets and in the jails." 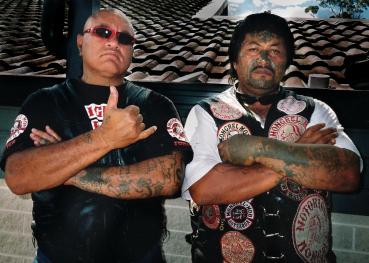 The accord was praised by leadership consultant John Wareham who guided more than 50 gang members and parents from the community through the wananga, which started on Friday night in the open-air of Turauwha's Whare, on the ridges above the pa site, and continued on Saturday and yesterday at nearby Waiohiki Creative Arts Village. Side-by-side in respective patches but shelving traditional rivalries, they spent more than 15 hours talking family, violence, drugs and gang pasts, and a future they hope will be better for children and grandchildren.
The focus was a booklet of readings Fatherhood, Gangs, Drugs and Choices, selected for the occasion by Mr Wareham, a New York-based New Zealander who, with Waiohiki-based gang culture luminary and social activist Denis O'Reilly, had staged a similar retreat in Hastings in 2005. Mr Wareham, who lectures leadership across the spectrum from company executives to lifers in maximum security prisons, said it was major progress from the experience six years ago. "The difference this time was to focus around fatherhood and, right from the first night up at Otatara, the guys opened themselves up from the heart," he said. "They spoke without notes, and they spoke as loquaciously as any courtroom lawyer." Most spoke of not wanting sons to follow the same paths of crime and violence, and of wanting them to get an education and a job, and wanting to be able to help them. Mr Wareham said: "It was important that when asked why they joined the gangs, they spoke not of crime, but of loyalty, respect and belonging, the same good qualities that would apply to joining the Rotary Club." Most showed profound insight around the readings, including common affinity with American author Max Phillips' Snakebite Sonnet and its messages of hope, let-down, failure and broken spirit. It led Mr Wareham to "push the envelope" more than he intended in the most intense stages late on Saturday, when gang members decided on a conclave the next morning, without the mentor. Mr O'Reilly said: "It was very challenging for everybody. John is not easy. The subject itself was hard. "It's a difficult side of town, a different area to work with, there's a lot of misunderstanding, and a lot of cynicism," he said. The accord was a start, with representatives committing to taking the message back to members and, in time, to other chapters. "People attribute all sorts of nefarious intentions," he said. "But what I hear coming out of the mouths of these guys, I feel, is the truth, from fathers who want to improve their lives, and that of their kids."